The Stetson family is in their third generation of ranching, teaching and training the fourth and fifth to be conscientious stewards of the earth’s resources in a continuation of tradition passed down from their beginnings. Their story began with James “Frank” Stetson & Lucienne Runyon. 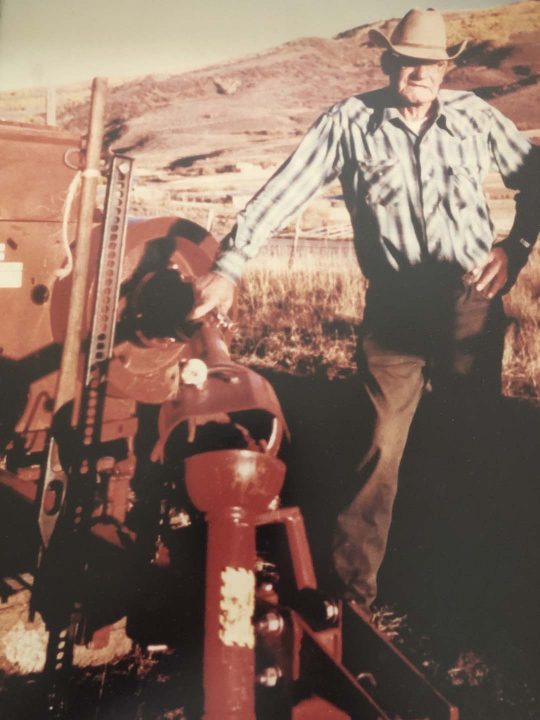 At the age of just 14, James set off from Baggs, WY to Walden, CO with a team of horses and one good saddle horse to begin supporting himself working in the mines. After spending some time working in the Walden area, he’d heard that the coal mines of Routt County were booming and that the state was offering homestead tracts of land to settle on near the area. He landed in Oak Creek, CO in the late 1920s, where he would eventually meet Lucienne.

Lucienne Runyon was born in France where her father had died in WWI. Her mother washed clothes and steamed laundry for the soldiers of the United States Army and eventually married one of the soldiers. Lucienne and her mother came to the U.S. through Ellis Island when she was just 7 years old, making their way across the country by covered wagon and eventually settling in the town of Oak Creek, CO where she would remain until her death in 2008.

James & Lucienne were married in 1931 and homesteaded in the Oak Creek, CO area, where they had three sons; “Frank” (Franklin Oliver Stetson) in 1932, Glen Eugene Stetson in 1934, and “Jimmy” (James Loran Stetson) in 1937. Jimmy was killed in a tragic accident when he became asphyxiated digging the family water well in 1956, and Frank attempted to retrieve him out of the well until he was overcome himself. Frank was hospitalized for a couple of days but survived. Glen was killed in a second unfortunate fishing accident in 1959, when his homemade boat capsized in Allen Basin Reservoir.

In 1944, James & Lucienne purchased the main homestead ranch on Yellow Jacket Road and grew their dairy into a profitable business, selling milk to grocery stores and door to door using goat driven carts. Through hard work and determination, they went from penniless to profitable. On April 25, 1946, Lucienne bought what is now Bell Mercantile in Oak Creek and operated it for several years as Stetson Mercantile. She was known for her generosity amongst all coal miner families in the area as she granted generous lines of credit for families to purchase groceries and supplies. Upon the sale of the Mercantile, she got into the business she was most well-known for – her Quarter Horse business. Lucienne bred and raised championship Quarter Horses, for ranch work, cutting competitions, and show. She was a member of the American Quarter Horse Association for many years, and in June 1999 she earned the 40-year cumulative breeding award from the AQHA. She not only raised and sold horses, but also rode and competed very well, winning many cutting horse competitions on her favorite stud horse, Poco Bimbo. 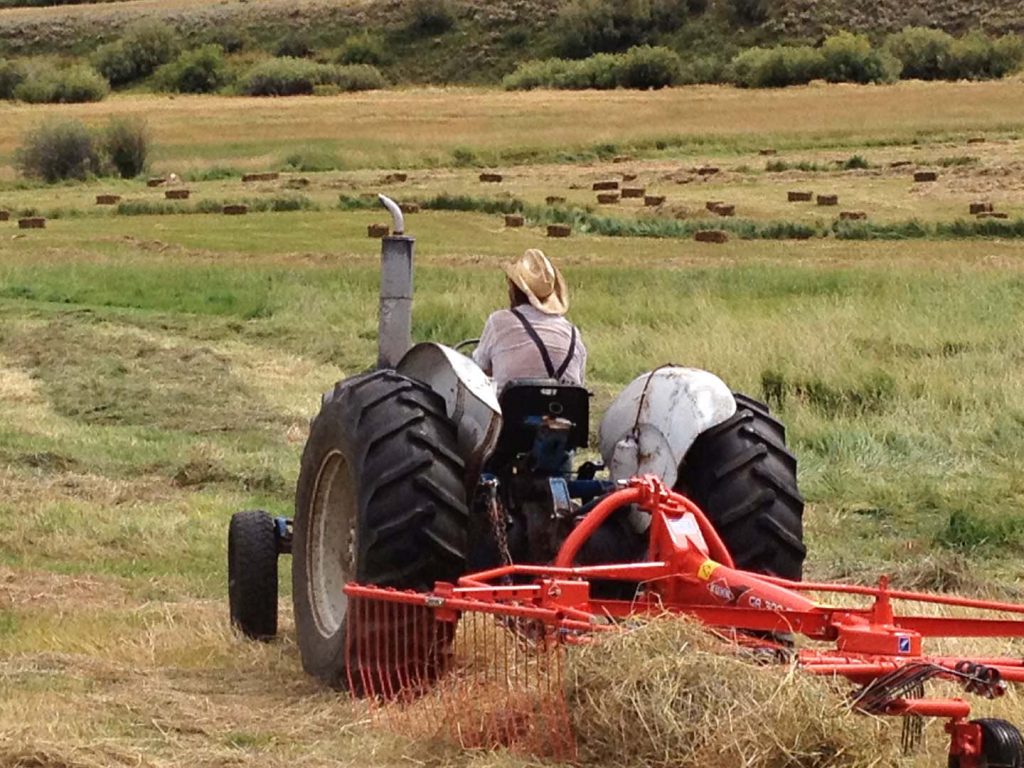 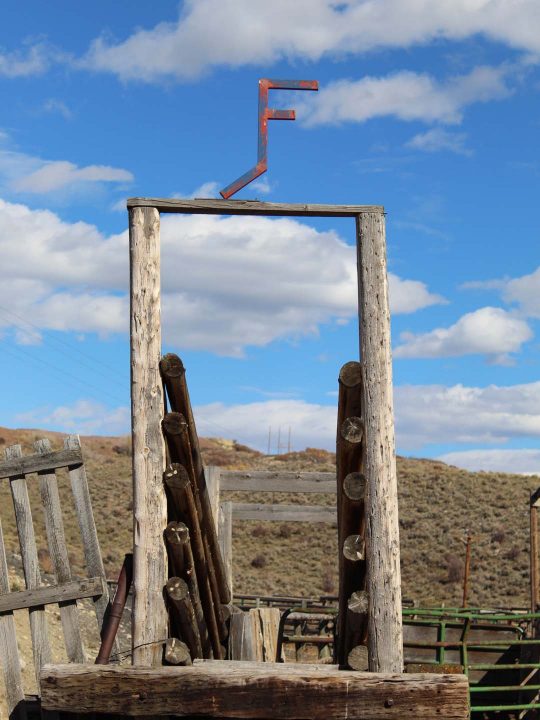 While James & Lucienne did get their start in the livestock business with their dairy cows, when the government stepped in and demanded all milk to be sold in mainstream stores be homogenized, they got rid of most of their dairy cows and started their Hereford beef cow operation. The two also put up tremendous amounts of hay, first using teams of horses and eventually purchasing mechanized haying equipment. The Stagecoach Reservoir/Stagecoach State Park used to be one of their many hay meadows, which James sold to the Upper Yampa Water Conservancy District in the late 1970s to begin developing what is there today.

James served as a Routt County Commissioner from 1937 until 1961. Lucienne found this helpful, as she once told him that if he didn’t get County Rd 14 paved (where the homestead was located), she would divorce him! It was paved shortly after. James eventually developed severe emphysema in the late 1970s and began spending his winters on a ranch he purchased in Boone, North Carolina until his death in 1983. 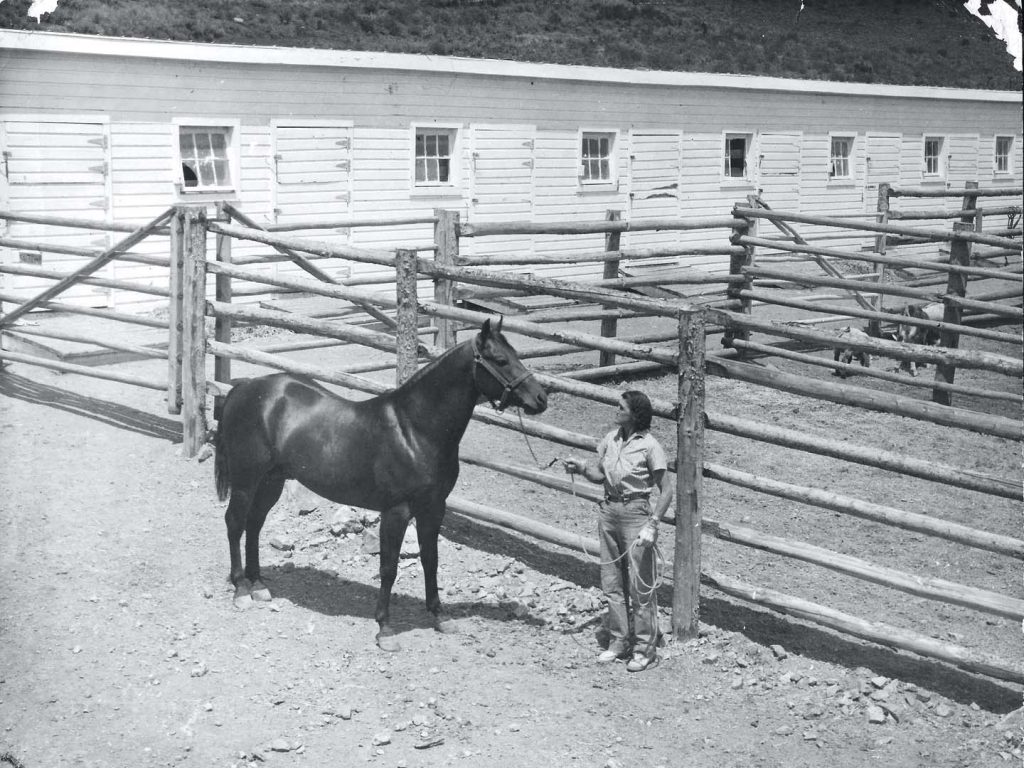 After being drafted into the military, their son Frank Stetson served in the Korean War from 1954 – 1956 training landmine sniffing dogs for the US Army. Shortly after returning from the war, he began chariot racing using horses that came from his mom, Lucienne’s, prominent horse breeding program, and won races in Laramie, Riverdale, Centennial, and Evergreen. He married Eileen McWhorter in 1957. Eileen McWhorter was raised in Masonville, CO but moved with her family to Yampa. Frank and Eileen worked side by side with his parents, James & Lucienne, until 1966. Eileen helped Frank with everything on the ranch, whether it was running the balers, calving, vaccinating, or branding, there wasn’t a job she wouldn’t do. Everything she did was done with the most contagious smile and laugh around. She loved working the ranch with her family more than anything. She also helped Frank organize stock contractors, repair fences, timed events, and helped with the marketing.

As a result of their steadfast devotion to agriculture, Frank & Eileen, held true to their family vision and raised their (4) children in Steamboat Springs as well as on the ranch in Oak Creek. Frank & Eileen started running Black Angus cattle on the ranch alongside the original Hereford cow herd. It was in 1966, when he started Stetson Reality (originally known as Strout Reality) and moved his family to Steamboat Springs. Frank had grown up competing in team roping events as an active member of the Yellow Jacket Rodeo Club. In 1975, Frank took over the now Steamboat Pro Rodeo series, known then as the Roundup Rodeo or affectionately as “The Friday Night Jackpot”, which he and Eileen ran until 1983. Frank & Eileen took over the family ranching operations in 1983 after the passing of his father, James. Lucienne held her Quarter Horse Liquidation sale in the spring of 1984 but kept a few mares to continue breeding well into the early 1990s. 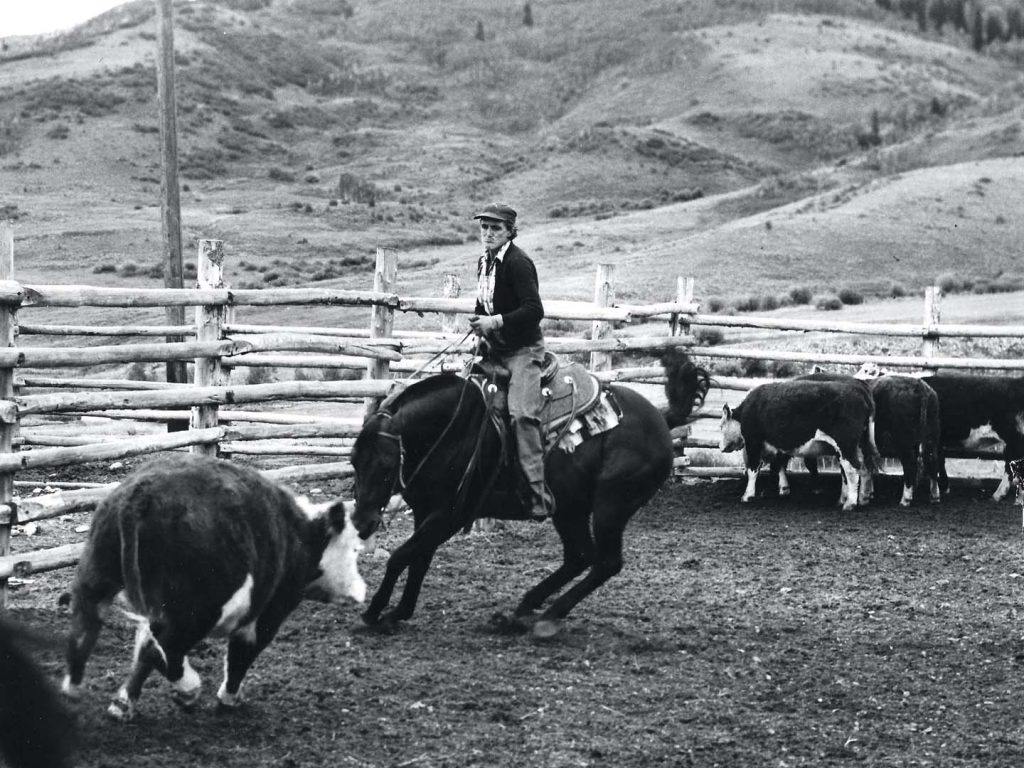 The Stetson family was known across the nation as one of the top breeders in the country for proven Quarter Horses. A fond memory of the caliber of horses they developed was after the boys had just cleaned house at the Carbondale Roping, winning a fair amount of money for the day. After the event was finished, a wealthy man from back East pulled up in a sports car with a horse trailer attached, claiming that his horse was one of the fastest in the nation. He somehow managed to talk the boys and Lucienne into racing against his horse. This gathered quite a few spectators and many bets were made. Keep in mind that these Stetson horses had all been competing hard throughout the day. First up was Jimmy, then Glenn. They both smoked the man’s horse. Lucienne stood by keeping tabs on the money and collecting bets. Last was Frank on his favorite horse at the time, “Old Chief”. Frank expressed that his horse was pretty wore out and not to expect much of a race. The man was hoping to win some of his money back, however Frank and Old Chief spanked the wealthy man from back East and the Stetson family left that day with an additional $1,700.00 in their pockets! 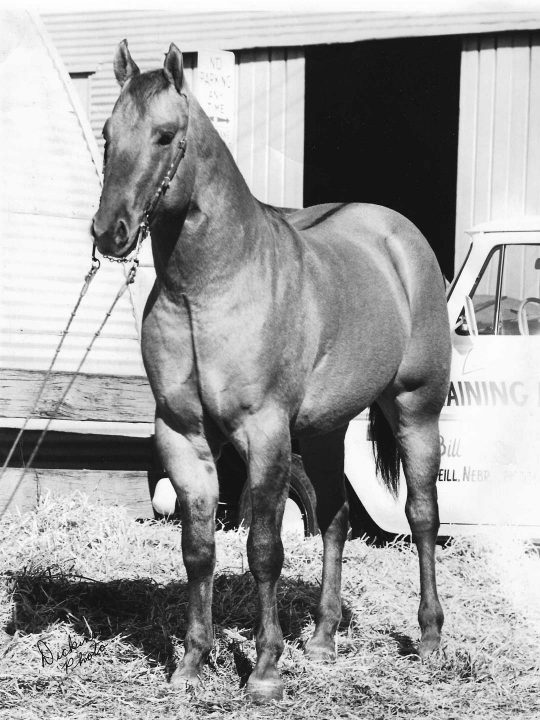 For our horses to be able to work in all conditions they not only need to have bone, stamina, and conformation, but they must possess the mind and disposition to be able to do whatever is asked of them.  For several generations, Stetson Ranches has accomplished this using the Foundation bloodlines of the American Quarter Horse. Today’s most fashionable cutting and reined cow horse bloodlines from other ranches are also being infused into the Stetson Ranches bloodlines through prominent reference stallions.

James & Lucienne planted the passion and tenacity necessary for Frank & Eileen to continue to develop their dream for their family. Frank & Eileen, in turn, passed that onto their children. Jay Stetson is the youngest son of their four children who founded Stetson Ranches with his wife Tina, in 2014. They left behind not only Jay & Tina (their children and now their grandchildren), but also their daughters and other son’s families who continue to carry the torch. Jay & Tina’s children continue to help them work the ranch in Montana. Jese, his wife Emma, and their two daughters, work alongside them as well as their daughter Krista and her two children.

[Image | James Oliver Stetson, Grafting an orphan calf on a mother cow in a chute on the homestead] 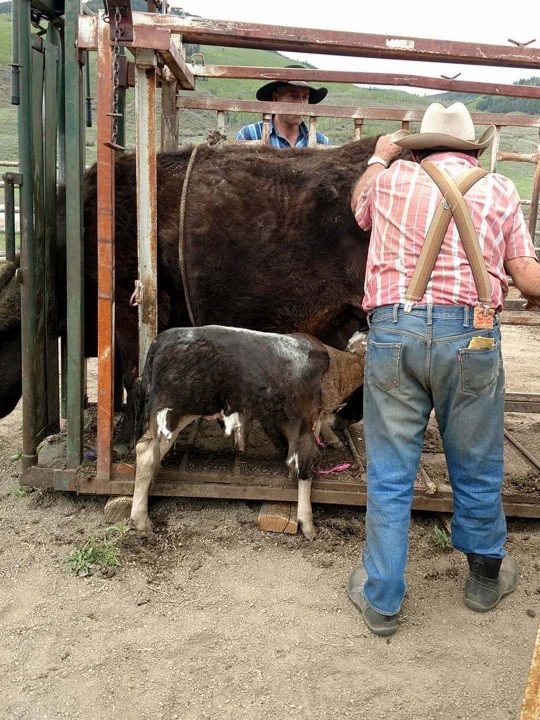 Stetson Ranches is rooted in family and tradition, with a long history of pursuing modern methods of the day, as well as focusing on maintaining what has made the Stetson name carry on for generations in agriculture: the ability to diversify without the fear of tackling something new.